How to find the dinosaur footprint for "When they ruled the earth" achievement / trophy (theHunter: Call of the Wild)

"When they ruled the earth" is a trophy on Playstation or achievement on Steam or Xbox for the Silver Ridge Peaks reserve in theHunter: Call of the Wild. The achievement requires you to snap a photo of dinosaur footprints, but these footprints can be very difficult to find if you don't know where to look.

In this guide we will be looking at where you can find the dinosaur footprints that are reuquired for the achievement / trophy and how to unlock it.

To find the dinosaur footprints in Silver Ridge Peaks, head to the region called Dinosaur Hill. In the southern part of the region you will find a landmark called "Frozen before time" (look at the photo below), and this is where you snap the photo. Look towards the cliff with all the footprints on it and open your camera to take a photo. And that's all it takes to unlock the achievement! 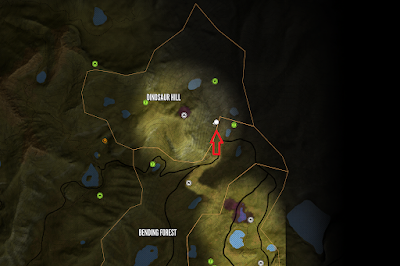 The screenshot above shows where the landmark is. Interact with this and point your camera towards the dino footprints that are located in the stoney area right next to it. Do not move in to take a close range photo of a footprint, but rather focus your camera on taking a photo of the entire stone wall with all the different footprints.

And that's all it takes to unlock the "When they ruled the earth" trophy / achievement!

PS. you use the camera by holding down square on Playstation, X on Xbox or P on the PC keyboard.

theHunter: Call of the Wild