How to get the Tomb Stalker mount (World of Warcraft)

July 29, 2018
The Tomb Stalker is a new mount added in Battle for Azeroth, and it can be obtained by all level 120 characters. What you need is to get the item called Mummified Raptor Skull, which is the item that will teach you to summon the Tomb Stalker mount.

The Mummified Raptor Skull drops from King Dazar, the final boss of the dungeon King's Rest, on Mythic difficulty. In contrast to previous instance mount drop, it will not drop on either normal or heroic difficulty, so you will need to farm it on Mythic. This means that you only have one chance per week to get it, instead of a chance each day.


King's Rest is a 5-man instance located in the Zuldazar Zone. It contains four bosses, and King Dazar is the final boss you will encounter there.

The drop rate for Mummified Raptor Skull is currently unknown, but it's been speculated to be around 1 %. This will make the Tomb Stalker a rather rare mount, so be prepared to run this instance a lot if you want it. 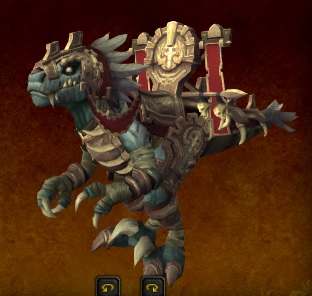