How to get the Darkwater Skate mount (World of Warcraft: Legion)

September 16, 2016
The Darkwater Skate is a new mount added in Patch 7.1 of WoW Legion, and is an aquatic mount that only works in water. It does not increase your swim speed, so it's mostly for vanity use, but it's a really cool and unique mount!

Getting it is tied to the Darkmoon Faire, so your only chance for farming for it is when this event is active. 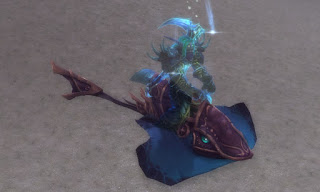 In order to get the Darkwater Skate you need to farm 500 Darkmoon Daggermaw. These are obtained by fishing in Darkmoon Island, and is pretty common there. Most catches on the Island is the Darkmoon Daggermaw, so you can fish for it pretty much anywhere you like on the island.

If you fish in any of the pools of Shipwreck Debris, you can get 2-5 fish per catch, while open water usually only gives one fish per catch. The fastest way to get the fish needed is by running around on circles around the whole island and fish in all the pools. This not not really viable without a waterstrider or a fishing raft, but with one of these, the fish per hour will be a lot higher than if you fish in open water.

At lower fishing levels you will get a lot of trash instead of the Darkmoon Daggermaw, so you should focus on fishing in the pools unless you are fishing level 500+. The pools have the same loot regardless of fishing level, so it's also a good way to level up fishing.

The mount itself is sold by Galissa Sundew, which is located on the docks on the southern part of the island. She also sells other fishing stuff for the Darkmoon Daggermaw, and the Darkwater Skate can be bought just like any other item. If you're interested, you can put two pets and two toys from her, but then you will need more Darkmoon Daggermaws.

It takes a good amount of time to fish all the required Darkmoon Daggermaw, and combined with the small amount of available time frame, this mount can be pretty annoying to get. However, if you spend an entire play session only fishing, you should most likely get it the same day. I personally spend around 3-4 hours fishing casually while watching Netflix on the other monitor, so its definitly doable without too much hassle.

If you are really lazy, or got a lot of gold left over, you can buy the Darkmoon Daggermaws at the Auction House. Their prices skyrocketed after the release of this mount, so you should expect to pay 30 - 50k gold for all the fish needed.