June 09, 2016
Patch 6.2 in World of Warcraft added tameable Felbound Wolves to the game, found in Tanaan Jungle. They are not a straight-forward tame like most other pets, but requires an item that is dropped from a level 100 elite that is designed to challenge hunters.
A lot of hunters will find this challenge difficult, but remember that it's possible to get help from a friend or two. Just note that the item that drops and let you tame a Fel Wolf is just lootable by one person, so if you are more hunters that cooperate, you need to kill it multiple times. However, the spawn time is only around 5 minutes, so it should not take too long.

Obtain the item that lets you tame a Fel Wolf

Right, lets start with the actual guide. First head to the marsh area south of Fang'rila in Tanaan Jungle. Here you will find a mob named Fel Rangari Anaara. She is a level 100 elite with almost 5 million health, and a lot of unique spells that will make sure you know your way around the hunter arsenal. What you need to do is use your spells to counter hers, so prepare Bestial Wrath, Tranquilizing Shot, Flare and Counter Shot in order to stop her. Most players will need a few attempts before getting her down, especially if they play solo, so keep practicing, and you will get her eventually. 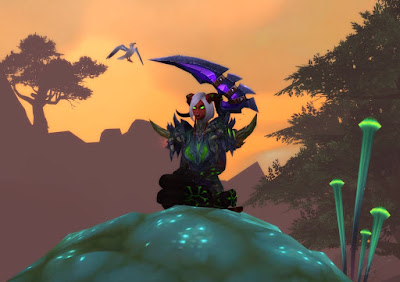 She will drop a Vial of Fel Cleansing upon death, and as said above, only one person can loot this per kill.

Now that you have the vial, head to the Temple of Sha’naar in the southwestern part of the map. Here you can find the Felbound Wolves. Just target one of them and use the vial, and it will stop attacking you, and become tameable in the next minute.
You should probably make sure that you are alone in the area, because other players can still kill the wolf, and players of the other faction can obviously attack you if you are on a PvP realm. Some wolves are asleep away from the pack (and therefore most players) and can still be tamed with the vial, so these are a good candidate for taming.
World of Warcraft