How to get the Harvest / Khazra / Fallen Pennant (Diablo 3) 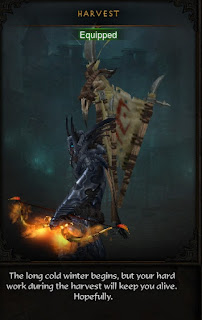 The Harvest Pennant (also known as Khazra Pennant and Fallen Pennant) is a dropable cosmetic pennant that can be found in patch 4.2.2 of Diablo 3 for the PC version.

The pennant drops from Graw the Herald in Act 2 Stinging Winds (The Lost Caravan). To search for him, use the waypoint to Act 2 Stinging Winds. He has two possible spawn locations. The first one is directly south of the waypoint. Each time you load the game, a random event will spawn in the middle of this area. It might be the Necromancer event etc. but the one you are looking for is The Lost Caravan Event.
If it does not spawn in the south middle part of the map, go back to the waypoint and go north, then east. There will be a new, large area of the Stinging Winds here, and in the middle of this there is a new event place where the event can spawn.


Graw The Herald can only spawn in the area where the Lost Caravan spawns, so just restart the game if neither of these areas has this event. This area has a 100 % chance to spawn another unique mob called Beyatt, but Graw The Herald has a much lower spawn chance. If he spawns, he will spawn alongside Beyatt.


His spawn chance is pretty low, but once you find him, but will drop a white item called Harvest each time. This can be looted by each member of the group, and once you click on the item in your inventory, the pennant will be available from the cosmetics screen.

Graw The Herald can spawn on any difficulty, and as with all of the other cosmetic mobs and containers, difficulty does not affect spawn or drop chance at all. That means you can farm him on normal, Torment 1 or even Torment 13 if you want to have a challenge. You will unlock the Harvest Pennant on any character you play, even across seasonal and hardcore characters, so just farm him on withever character you want to.

The Harvest item that drops is just a regular white item, so be sure to check out the ground properly so you won't miss it. It does not have any type of indicator for dropping.

(before Blizzard announced that the Pennant does not drop in patch 2.4.1):
This pennant has been a big mystery ever since the 2.4.1 patch in which it was added to the game, and even has three names. The original nickname it was given was the Khazra Pennant, but after a Blizzard employee hinted that it may drop from something fallen, people started calling it the Fallen Pennant. The official in-game name is however Harvest.

The exact drop place for this pennant is still unknown, but there are some clues as to where the players can find it. It has been confirmed to drop in-game, and the confirmation even included a hint as to where we can find it: "this is indeed a Fallen pennant rather than a Khazra one". Below are some of the most promosing theories as to where it can be found:

1) The most popular theory as to where we can find it, is from a unique mob named Graw the Herald. No one knows where he spawns, but dataminers found the following text string in the game: FallenShaman_A_Cosmetic_Unique_01: Graw the Herald, which "proves" that he is there. A lot of people thinks the 01 part of his name refers to him being somewhere in Act 1. If that is true, he is probably somewhere where there rarely or never are bounties, or else he would probably have been found already.

3)  A reddit user thinks Graw the Herald might spawn in one of the two instances in Archives of Zolton Kulle. It might be possible, so this is another place that could be farmed.

4) Another unrelated clue may be found in the flavor text, which reads the following:
"This pennant smells of dead leaves. You should unfurl it.
The long cold winter begins, but your hard work during the harvest will keep you alive. Hopefully."

If the Harvest Pennant is confirmed to be found or some new clues or information arises, this post will be updated as soon as possible to reflect the drop location, so make sure to bookmark this page for the latest info. Also feel free to leave a comment with any theories, clues or anything else that you want other people to know about the pennant.

Update June 15. th: Blizzard is surprised that no one has found it yet, but again confirms that it is possible to get. However, they will up the drop rate in a future patch. Source.


Note: this post has been heavily edited in July 2016 because of misinformation from Blizzard!
Diablo 3