May 15, 2019
Rage 2 just got release, and in this post you will find 11 tips that are really need to know when you first start playing the game. While this guide won't make you a Rage 2 expert just yet, it will give you some nice advice on what to do in the early game, and which parts of the game to focus on.

If you got any other tips for beginners, make sure to let us know in the comment section below!

1) Get the Combat Shotgun early on

The Combat Shotgun is likely the very best common type weapon in the game, and you can get it very early on. You should get it as soon as possible! To do this, head to Marshall in Gunbarrel and accept his mission. When completing the very first mission, you will find the Combat Shotgun, and it's yours to use forever on from that point on.

The great thing about the Combat Shotgun is that it is pretty accurate when you hold down the zoom button, but it also gives a great scatter when fired from the hip. This makes the Combat Shotgun extremely versatile, and you might not feel the need to change it for any other weapon for a long time. So don't ignore Marshall when you first get to Gunbarrel, or at least not until you got the shotgun.

You have the option of spending your resources on permanently upgrading your health, overdrive meter or damage dealt when you are in Wellspring, and we recommend spending them on permanently increasing your damage. This is by far the most efficient use of the resources, especially since the game is pretty easy, so you won't really need a permanent health upgrade anyway.

3) You can repair your car

4) Don't focus too much on the main quests

The main story line is surprisingly short in Rage 2, so you should focus on exploring the world and having fun instead of rushing the main story, or else you will find yourself finishing the game in a very short amount of time.

There are so much more to do than just the main mission anyway, so go ahead and do all those side quests, explore all the cool stuff on the map, and just have fun. A lot of the areas that are unused for quests have a lot of cool stuff and great loot hidden somewhere, so it tends to be worth just exploring at your own pace anyway.

The original ability selection keys are a mess, requiring you to hold CTRL while clicking on keys like F or R. That's just a big mess. Remap these to something more intuitive, preferably keys where you can click on a single key without having to hold another one down at the same time.

It does not really matter which keys you chose to use instead, so just go with whatever you feel is comfortable. It's not really possible to make it any worse than it already is anyway. 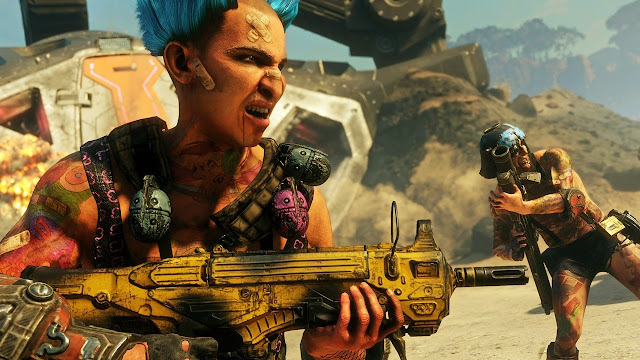 6) Talk to all the NPCs twice

Some NPCs will only give you a reward the second time you talk with them, and only tanking you for doing a mission the first time. So if there's an NPC with a dialogue prompt, talk to them twice. You won't always be rewarded for doing this, but every once in a while you will get a reward!

Arks are essentially your main abilities in the game, and you will want to get all of these. Luckily for us, they are all marked on your map, so if you got nothing better to do, hunt down these to find the superpowers they have. These areas tend to contain a lot of loot with rare resources and the likes, so if the Arks themselves aren't a good enough reasons, then you've got another one.

Very few of the Arks are strictly needed to finish the game, but they are a huge quality of life improvement. Some of them are also really great to use, and allows you to get to new areas more easily (like the Double Jump Ark).

8) Change the time of day to get daylight

Some missions and areas can be very difficult to navigate during the dark of night, but it's actually possible to change the time of day in Rage 2. All you need to do is to head to the Photo Mode and go to the options there. This allows you to manipulate the clock to be whatever you feel like! This is a great way of getting rid of that annoying dark that prevents you from scouting far into the distance.

9) Always buy crafting schematics when you find them

Crafting in Rage 2 can feel a bit unintuitive, but what you want to do is to get as many schematics as possible. You buy these from vendors, and they stack, and when you have a certain number of the same schematic, you unlock the next rank of the crafting. You don't have to use the schematic or anything like that, just buy it from the vendor and you will soon get higher ranks on your crafting.

Every once in a while, a visible meteor will fall down from the sky. You should look for this to get a lot of loot! It's not that difficult to find, especially after you realize that it can be tracked on the map.

For those of you that own the Deluxe Edition, the game will spawn a rare meteor that will give you the BFG 9000 early on, so this will likely be the first meteor you find. So while most meteors are random events, some are scripted, but they are still worth checking out as soon as you see them.

11) You can buy MTX with in-game money

There is no need to spend money to get gold weapons or other MTX skins in Rage 2, because you can trade in-game dollars for Rage Tokens that are used to buy the MTX skins. So don't cash out real money unless you feel like it, because you will likely be able to afford the cool skins later on anyway.

If you want any of these skins, head to Wellspring and look for the vendors that sells them.
Rage 2