How to get the Frightened Kodo mount (World of Warcraft)

January 07, 2019
The Frightened Kodo is a new mount added in patch 8.1. It is usable by both factions, making it the only unarmored kodo that can be obtained by Alliance players. The mount is tied to level 120 Darkshore, and to get it you simply need to find an NPC called Frightened Kodo and right click on it. You do not need to kill a rare or anything like that, and the first player who click on the NPC will get the item to learn the mount in their inventory.

The Frightened Kodo NPC will spawn in southern part of Darkshore on the four spawn points seen below: 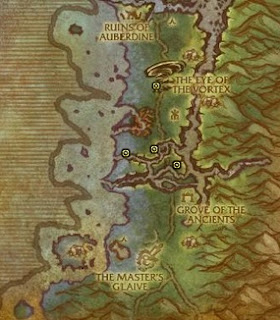 TomTom waypoints for all known spawn points are as follows:

The respawn timer is reported to be between 2 hours and 9 hours, so be prepared for a long wait before finding it. Most estimates have placed the respawn timer at around 6 hours. It seems to spawn pretty much instantly after the server resets, so it might be a good idea to check for it just after a server restart.

To notice when it spawns, use your favorite rare spawn add-on, or just spam a macro with "/tar Frightened Kodo" every few minutes. I think it's much better to use an add-on tough, because then you will be instantly notified when it spawns.


Some small tips for making your farming of the Frightened Kodo a bit easier:

- It can be obtained by any character that is able to click on it, even level 1 character. However, you need to be level 20 to use it, so you could potentially make a level 20 Allied Race character to use as a scout. It would be even better with a level 110 Class Trail Character tough, since these know how to fly.
- Anyone can click on the Frightened Kodo, even when the opposing faction controls Darkshore. So it does not really matter if you play Alliance or Horde, and you both have to share the rare spawn.