How to get a Corgi Pup pet (World of Warcraft: Legion)

November 16, 2016
The Corgi Pup is a new battle pet tied to the 12th Anniversary of World of Warcraft, and can be bought by any player for 200 x Timewarped Badges. This might sound like a steep price, but all players get 200 of these in their mail box upon logging in during the Anniversary event, so you can just log in to an alt and use these badges to purchase the pet.

You buy the pet from one of the Historians in either Stormwind or Orgrimmar. Just follow the quest marker from the quest you get in the mail to find the vendor.

The pet can not be caged, so it's not possible to trade it to other players or sell it on the auction house.

The Corge Pup is most likely only tied with the 12th Anniversary, so you better log in during November 14th to November 30th 2016 to be able to get it. 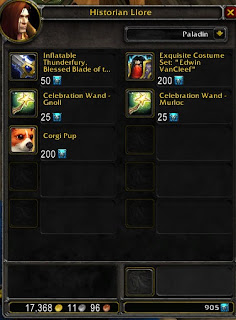